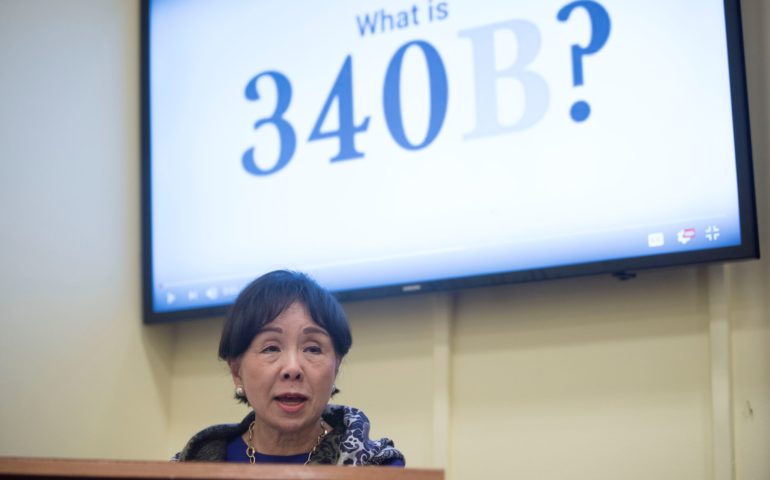 The legislation not only clarifies the intent and function of the program, but also codifies the definition of “patient,” ensures program transparency and compliance, expands 340B eligibility to behavioral health and substance abuse treatment providers, and rescinds onerous Medicare reimbursement cuts for 340B drugs furnished by certain 340B safety net hospitals.

Ryan White grantees are among the original safety net providers afforded drug discounts under the 340B statute.  The Ryan White program is the federal government’s primary financial investment in the fight against the HIV/AIDS epidemic, and Ryan White funds support numerous clinics throughout the country devoted to caring for this vulnerable population.

Sara J. Dingwall, Pharm.D, BCPS, AAHIVP, President of RWC-340B and Pharmacy Director of Whole Family Health, an HIV/AIDS clinic based in Florida said, “Rep. Matsui’s legislation is especially vital for Ryan White clinics because it clarifies the important role that the 340B program plays in helping us to serve our patients.”  She added, “To be successful in the fight against HIV/AIDS, persons living with the disease require not only prescription drugs, but also a full continuum of care – from testing, to linkage to care, to counseling, to medication adherence programs.”

Many of the continuum of care services are not reimbursed by any payer, although these are the services that most directly help Ryan White clinics identify HIV/AIDS patients and help them to achieve viral suppression. Savings from the program are used by Ryan White clinics to provide the full range of services needed by the HIV population, including testing, linkage to care, retention, case management, medication therapy management, among others.  The program allows these services to be provided at little or no cost to needy patients.

“RWC-340B is also especially pleased to see the legislation include a prohibition on private payers reimbursing less for 340B drugs than for other drugs, commonly referred to as discriminatory reimbursement,” said Brian Rasmussen, Pharmacy Director, One Community Health in Sacramento, California.  Pharmacy benefit managers, managed care plans, and other third party payers are increasingly usurping the benefit of the 340B program from Ryan White clinics by reimbursing for 340B drugs well below the payers’ non-340B rates and by establishing other discriminatory terms in their pharmacy participation agreements.  “Left unchecked, discriminatory reimbursement will greatly reduce, if not eliminate, the benefit of the discount for Ryan White clinics, thereby undermining the purpose of the 340B program,” said Rasmussen.  He added, “Congress intended the benefits of the 340B program to accrue to 340B covered entities, not to payers that do not have the same safety-net mission.”

For these reasons, RWC-340B, a national organization of clinics serving millions of HIV/AIDS patients, lends its wholehearted endorsement to this legislation.

Ryan White Clinics for 340B Access (RWC-340B) is a coalition of HIV/AIDS medical providers receiving support under the Ryan White CARE Act. The CARE Act provides funding for services primarily to poor and/or uninsured people with HIV/AIDS. Ryan White providers are eligible to participate in the federal 340B Drug Discount Program, which enables them to expand and support care. For further information, visit RWC-340B.org or follow us on Twitter @RWC340B.