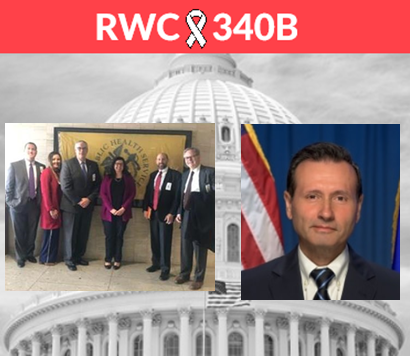 On October 29, 2018, RWC-340B leaders met with George Sigounas, M.S., Ph.D., the HRSA Administrator, and Beth Nelson, HHS Health Policy Advisor, to advocate to preserve and protect the 340B program for Ryan White clinics. RWC-340B leaders described how the 340B program supports essential services needed to treat the HIV population and to stem the spread of HIV/AIDS.  They emphasized that the 340B program is integral to these efforts, and warned of the unintended consequences of proposals to change the program that would significantly harm their efforts.

Specifically, RWC-340B leaders detailed the importance of protecting HRSA’s current patient definition guidance and explained the dangers of limiting access to 340B drugs to the uninsured.  In addition, they asked HRSA to waive program income requirements so that Ryan White clinics can leverage their expertise in treating a chronic and socially stigmatized illness to help those addicted to opioids.  RWC-340B representatives also informed Dr. Sigounas and Nelson that many private insurers are trying to usurp the benefits of the 340B program by adopting lower reimbursement rates for 340B providers and that that many state Medicaid agencies are adopting policies related to Medicaid managed care duplicate discounts that are contrary to the Medicaid statute.  Finally, RWC-340B leaders thanked Dr. Sigounas for seeking to implement the manufacturer Civil Monetary Penalty and penny pricing rule by January 1.