Defense in Congress, Offense in the States: Ryan White Clinics Fighting Against Discriminatory 340B Reimbursement 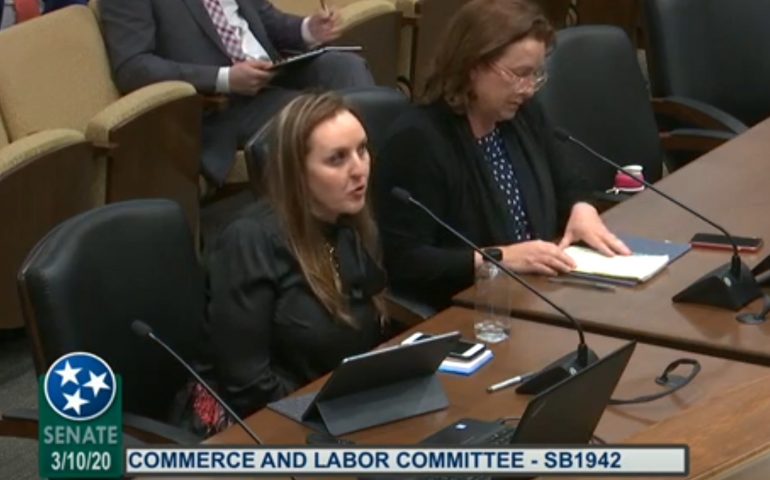 “We are taking the fight to the states,” said Shannon Stephenson, president of Ryan White Clinics for 340B Access (RWC-340B), a national organization of HIV/AIDS medical providers receiving support under the Ryan White CARE Act and participating in the 340B drug pricing program.

Just before the COVID-19 crisis, state legislation to prohibit discriminatory reimbursement was advancing in Stephenson’s home state of Tennessee. Legislation was advanced in the Tennessee House and remains pending in the state Senate.

Stephenson and RWC-340B legislative counsel, Peggy Tighe, J.D., Principal at Powers Law (a 340B Report sponsor), testified before the Tennessee State Senate Commerce and Labor Committee on March 10. The Senate committee delayed further action on the bill to gather additional information and remains delayed due to the COVID-19 emergency.

Stephenson said, “We are asking the states to help us protect 340B.” She added, “Now more than ever, if the states allow PBMs to take away the benefit of the 340B program, states won’t be able to pick up the costs we now bear to help our communities.” In addition to her role as RWC-340B President, Stephenson is the CEO of Cempa Community Care, a Ryan White clinic with locations in Chattanooga and Johnson City, Tenn.

States that have recently passed legislative language to prohibit discriminatory reimbursement include Utah and Oregon (in March 2020 and April 2019 respectively) as well as West Virginia, Minnesota, South Dakota, Montana, Massachusetts, and Rhode Island within the past two years. Other states actively engaged in efforts to advance similar legislation earlier this year include Ohio, Florida, and Georgia.

RWC-340B and their allies have argued that discriminatory reimbursement allows for-profit PBMs to threaten the safety net when it is most vulnerable; harms low income, medically vulnerable patients served by 340B providers; and undermines the purpose and efficacy of 340B. They also contend that HRSA has stated that discriminatory reimbursement is a serious threat to the 340B program. Further, they note, the practice allows PBMs and insurers to lower 340B provider rates compared to non-340B.

“The 340B program was never meant to allow PBMs or insurers to usurp the benefit of the 340B drug discount program,” said Tighe. “We are busily preparing to continue this important fight at the state level by aligning RWC-340B with community health centers, hospitals, and other HIV/AIDS allies.”